Every year my friend and I take each other to lunch or supper at a surprise michelin starred restaurant for our respective birthdays. This year I was very kindly treated to a tasting lunch at Ametsa, which we both wanted to go to after sampling some of their delicious dishes at Taste London in June. It is a small, unassuming restaurant in the Como hotel in Belgravia and decorated in a very tasteful modern way. The first thing that hit me was the smell of spices, along with the very welcoming staff. We chose the 5 course tasting menu with wine pairing, all the dishes sounded very interesting. First of all we had nibbles of scorpion fish cake, ham test tubes and a potato canapé. The fish cake was yummy, the test tubes were only ok and the potato was also very good. Then came the bread which was good and obviously fresh but I really appreciate hot bread that is interesting in flavour and this was not. 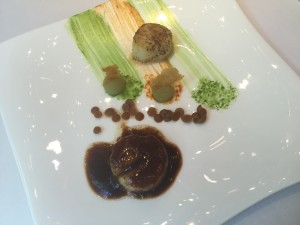 The first dish was scallops, which was served with a black pudding sauce, brushings of plankton and a Spanish pepper that apparently is sweet to some people but very spicy to others (my mouth felt like it was on fire). For me the plankton was gimmicky and added nothing to the dish apart from colour, the scallop was perfectly cooked and the sauce delicious- it was a tasty dish but it didn’t blow me away.

‘Egg in the Leaf’ 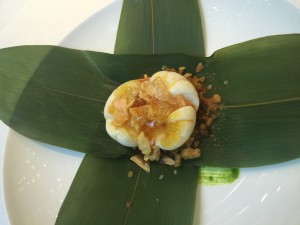 Next came this delicious egg dish which was served with a ham consommé and a special kind of chorizo which had been sweetened with dates. The dish was simple but had so much flavour and differen’t textures.

‘Tuna with Cinnamon on Fire’ 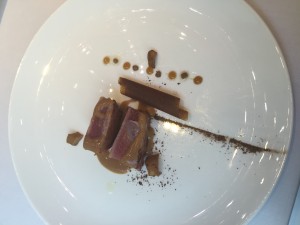 The fish dish was tuna which I have to say isn’t my favourite unless it is totally raw, luckily this was only lightly seared. I wouldn’t think cinnamon and tuna is necessarily a match made in heaven but actually this dish was surprisingly good very well balanced. 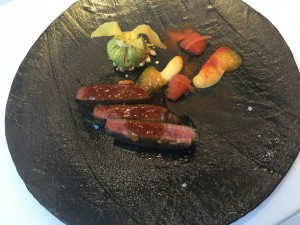 The last of the savoury dishes was the fillet of beef which took me to Mexico with its flavouring but to France with its perfect beef jus. It was an unusual dish served with an avocado mousse, grapefruit and green tomato. Again it was a very tasty dish but just a bit odd. 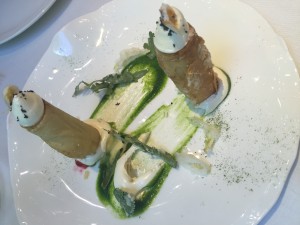 The passionfruit chimneys were served with Italian meringue and a parsley sauce, which surprisingly worked and provided an earthiness which combatted the very sweet meringue. 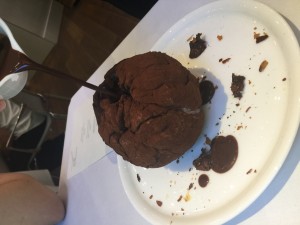 We chose to have an extra dessert because, well why not?! We fancied some chocolate and if you are a chocolate lover then this is heaven. It was a very light chocolate meringue style dessert which melted when the hot chocolate and cointreau sauce was poured on. It was very rich but scrumptious!

When I was asked by my family if I had a nice time and was the meal good my answer was of course yes, due to fantastic company and three delicious glasses of wine. The food was what I can only describe as interesting and tasty, yes I enjoyed it and I would recommend the restaurant to someone who wanted an experience. However I thought aspects of the meal were gimmicky and some of the combinations not to my taste. Overall though the service was attentive and professional and the food definitely worth sampling, would I go back- not in a hurry but I am certainly glad to have experienced it.